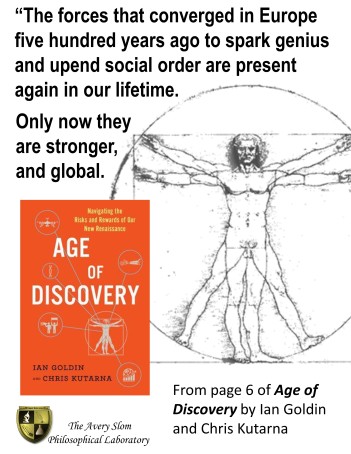 Age of Discovery: Navigating the Risks and Rewards of Our New Renaissance by Ian Goldin and Chris Kutarna

The years 1450 through 1550 mark the height of the Renaissance. The recently invented printing press encouraged literacy and facilitated communication. Larger ships brought about increases in trade and migration. New technologies such as the telescope enabled startling discoveries, and information about them was shared quicker, easier, and farther than ever before. This was the age of Leonardo and Michelangelo, an age of great achievements.

It was also a time of daunting risks, conflicts, and challenges. As people moved, diseases spread. New ideas challenged tradition and threatened the powers that upheld it. The Western world was ripe for political, religious, and societal change, but these changes were resisted, both by nature and by cultural inertia.

In Age of Discovery, Goldin and Kutarna (both of the Oxford Martin School, a research and policy unit based in the Social Sciences Division of the University of Oxford) draw parallels between that period of history and our own. I can’t do justice to their full argument or list all their supporting evidence in this short review, but I will try to summarize some of their key points.

The authors mark 1990 as the approximate start of a New Renaissance. They convincingly show that forces similar to those that defined the original one are at work now. Like the printing press of the 15th century, the internet is expanding our ability to communicate and coordinate. The lowering of political barriers is facilitating trade and migration. Science is making amazing, perspective-altering discoveries. New technologies are emerging and being quickly adopted. But perhaps most important of all, and just as in the Renaissance of the past, great minds are coming together, irrespective or national borders, to find answers to questions and solutions for problems.

For the most part, our New Renaissance has been successful. From a global perspective, health, wealth, education, personal freedom, safety, and opportunity are all better now than at any time in the past. Our ability to combat disease, hunger, and poverty has never been greater. But, as with all change, there have been unforeseen or irresponsibly ignored negative consequences. Also as in the past, the changes happening now and the opportunities they offer are coming into conflict with political and financial establishments and with religious and cultural traditions. The risks of social upheaval are again great.

Will we embrace the opportunities presented by this New Renaissance or will we squander them? Will we take action to address global issues or will we delay until social and environmental crises are at hand? The authors are cautiously hopeful and offer some suggestions. But whether we heed their advice or not, changes are happening. How these affect the human condition depends on what we do…or don’t do. It’s up to us.