They’re Not All Racists 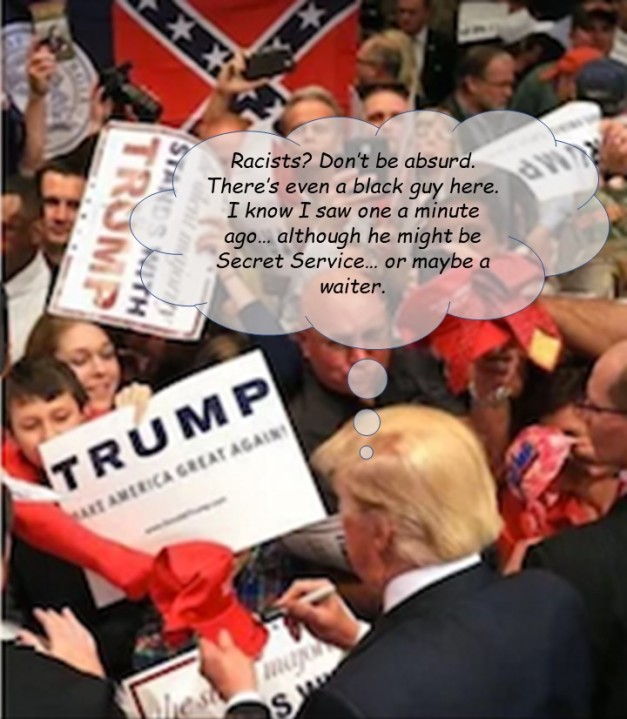 Recently, I saw a Facebook post by a lady who self-identifies as both a Republican and a Trump supporter. She said she resented being accused of being a racist because of her political affiliation. Not all Trump supporters are racists, she maintained.

Logically, I can agree with that. I am sure many Republicans don’t see themselves as racists, or as any of the other negative stereotypes that have increasingly become associated with the party, especially since Trump became its primary spokesperson. Republicans aren’t all racists, or sexists, or religious fundamentalists, or paranoid gun toting conspiracy theorists, and the many who aren’t understandably resent being grouped with those few who are.

Sadly, this kind of cognitive pigeonholing is common. There is an unfortunate human proclivity to generalize a universal truth from a few (perhaps anomalous) examples. I imagine such behavior has evolutionary survival value. Think about it. While only a few types of snakes are poisonous, avoiding all of them makes it far less likely you will be bitten by one that is. We probably have a gene for this kind of thing. That doesn’t mean all snakes deserve to be shunned, although many of us do have an irrational phobia about them. It’s called ophidiophobia.

There doesn’t have to be a psychologically accepted term for an irrational fear for it to exist. There are people who fear butterflies, or trees, or speaking in public. Some people feel anxious around police, or protestors, or clowns. This kind of generalized anxiety may not be deserved, but that doesn’t mean it isn’t real. There may sometimes even be a cause for it, some experience the fearful person had that traumatized them for life. Apparently, it doesn’t take much for people to build themselves a phobia, and it takes even less for most of us to make unwarranted assumptions and jump to unjustified conclusions. So, when we see video of a cop kneeling on a black man’s neck, or a picture of someone at a protest throwing a rock or breaking a store window, we sometimes must struggle to avoid thinking, “They’re all like that.”

Not so long ago, in an America that felt much different than the one we have today, I worked for the US Department of Defense. Ethics was a big deal back then. DoD employees were advised (formally and repeatedly) to avoid any possible semblance of impropriety. We were told to always be mindful about doing anything that might be misconstrued to imply corruption or favoritism. So, for example, when attending a meeting at a defense contractor’s facility, we could accept free cups of coffee (if such were available to their own employees), but a donut might be a bit too much. Being treated to a free lunch was right out. Someone (probably with an agenda) could claim we were accepting a bribe to award the company with a lucrative contract, or to overlook some deviation in the performance of one they already had. My point here is that, justified or not, impressions matter. The policy was meant to preclude any behavior that might, even inadvertently, undermine confidence in the integrity of the DoD. It was intended to minimize the chance of anyone having any reason to jump to the wrong conclusion. Because that’s what people do. They generalize from the specific to the whole. Whether we like it or not, we are often seen as representatives of some group. In my case, above, it was Defense Department employees. For a cop, it’s police in general. For a guy in a MAGA hat, it’s Trump supporters.

In most cases, these generalizations make no sense. People who are likely to be swayed by a free lunch are not predisposed to work for the government, and most people prone to excessive violence are not disproportionately inclined to flock to the ranks of the police force. But when it comes to Trump supporters, it’s a bit different. I think it’s safe to assume that anyone waving a Confederate battle flag and flashing a White Power hand gesture also supports Donald Trump. So, whereas all Trump supporters aren’t racists, it seems pretty clear that most racists are Trump supporters.

Yeah, but so what? That’s hardly Trump’s fault. He can’t control who likes him. And if a long-disfavored ideological group such as white supremacists suddenly finds favor with a major political party, there’s hardly any harm in it. It’s certainly good for the party, which can count on the racists’ votes, and it’s good for the racists because they get to feel that their movement has regained some measure of lost legitimacy. It’s just politics, after all, and, as the saying goes, politics makes strange bedfellows. You shouldn’t take political rhetoric too seriously. I have heard Trump supporters (well, one Trump supporter) make this very claim. Republicans in general are not racists, sexists, religious fundamentalists, or even gun owners. They only play some minimal lip service to these groups to gain their votes. And it’s not like it really matters. Legal segregation is never going to return, women aren’t going to lose the vote, and the Constitution isn’t going to be changed to impose a state religion.

Perhaps, but let’s go back to appearances again. How does it look when someone you don’t want to be associated advertises their association with you, like when the racist puts on his MAGA hat? Even accepting as true that racists, sexists, religious extremists, and armed survivalists combined do not make up the majority of the Republican Party, in the eyes of the public at large, they do represent it. When the guy flying the Confederate battle flag also has a Trump sign in his front yard, does that not give the impression of a link exiting between racists with Trump supporters? (This isn’t a hypothetical. There is a house on my street with both a large Confederate flag and a much smaller Trump 2020 sign in the front yard. It’s the only house in the neighborhood with either, and it has both. Granted, it’s a very small and nonrepresentative sampling, but it provides a 100% correlation. If you drew a Venn diagram to represent the two groups (racists and Trump supporters), it would be a single circle.)

I’m not claiming that there is a legitimate reason for suspecting someone is a closet racist simply because they identify as a Republican or even as a Trump supporter. I am simply attempting to explain why people might jump to this conclusion. It’s all about appearances. Right now, the Republican party appears to support racism, not only because of things Trump has said (e.g. his now infamous rant about Mexican immigrants), but also because some of the party’s more vocal members are overt racists. I believe the perceived association between Republicans and racist and other fringe groups will persist until such time as Trump and other party leaders strongly repudiate and take substantive actions against them. Until that happens, traditional Republicans may wish to ask themselves with whom they choose to be associated.