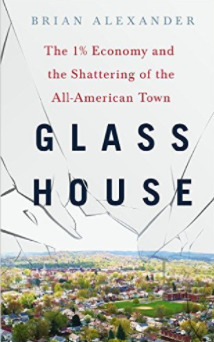 Glass House: The 1% Economy and the Shattering of the All-American Town by Brian Alexander

The business of business is to make money. That’s the basic premise of an economic theory advocated by the late Milton Friedman and embraced by politicians from Reagan to Trump. Investors entrust companies and corporations with money with the expectation of receiving even more money. Investor value is therefor the primary concern of businesses. It’s not about producing goods and services, at least not primarily. Those are simply a means for making money. It’s certainly not about creating good-paying jobs. Employees are human resources to be used as needed and discarded when not, just like any other resource. An efficient business creates as much product as it can sell while employing as few people as possible, paying them only what it must. Anything beyond that cuts into profits that could otherwise be returned to investors. Generating more money at less cost makes a business efficient. It makes it successful. It increases its value and attractiveness for even more investment. It raises the price investors can get when they want to sell their shares. It’s a fairly simple idea. Investors provide capital to fund businesses in which workers create wealth, and then the investors extract the wealth beyond that necessary to maintain the business. It’s a great mechanism for making money, and somehow, through the magic of the invisible hand of free market capitalism, it brings prosperity to all. Or so the theory goes.

Glass House provides a case study of how the theory has worked for Lancaster, Ohio. It’s a compelling account of the Anchor-Hocking glass company, once a major U.S. producer of glassware and the lifeblood of this small city. The company has generated a lot of wealth for investors over the last half century, but there has been a cost. This is the story of those who paid it.